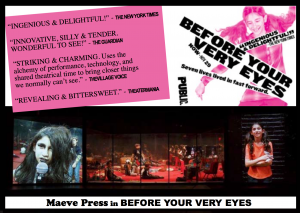 BEFORE YOUR VERY EYES

“Before Your Very Eyes” is a downer with an upper of a cast. That contrast is pretty much the entire point of this ingenious but ultimately unsurprising theatrical essay from the media-mixing British-German arts collective Gob Squad, now in residence at the Public Theater.

Here’s the premise: Take a group of young people — really young, between the ages of 9 and 14 — and put them in a petri dish of a room, behind a one-way mirror. Then let audiences observe as they age — really age, into their eighth and ninth decades — via the theatrical equivalent of time-lapse photography. It is, in other words, a complete middle-school-to-grave experience.

Or, to quote the impersonally annotative LED display above the stage of Martinson Hall, where “Before Your Very Eyes” opened on Monday night: “Real live children! A rare and magnificent opportunity to witness seven lives lived in fast forward before your very eyes.”

A clarification is perhaps required for the very literal-minded: The members of this born-to-die septet do not really grow older as we watch them, at least no older than the 70 minutes it takes to perform the show. Yes, they do commune with videos of their somewhat younger selves. (The ensemble members collaborated with the Gob Squad team over a period of two years.)

But the serious crow’s-feet-and-potbelly stuff is achieved through blatantly artificial means, as the young folk transform themselves into old-older-and-oldest folks by drawing heavy lines on their faces or dusting their hair with powder. The defeated posture that comes from having your dreams systematically stripped away is realized through good (and it is good) old-fashioned acting.

Thus do they fulfill the prophecy in what one of them delivers as a prologue: “We’ve been thinking about death lately. No matter how things work out, I will be dying. So will you. So will everyone here.”

Any show that states its intentions so baldly right up front had better come up with engaging ways of fulfilling them if it’s going to hold our attention. Fortunately, Gob Squad has picked its youthful specimens well, or at least that was evident with the group I saw. (Its members, all terrific, are Mikai Anthony, Eloise Celine, Margalit Duclayan, Jasper Newell, Maeve Press, Matthew Quirk and Aja Nicole Webber.)

There are two alternating casts. I got Team A. (That’s as opposed to Team 1; note the favoritism-dodging nomenclature.) And it was made up of highly individualized beings with whom you really do enjoy spending time. Just as important, to a person, they exude a spontaneous self-consciousness that has less to do with being on a stage than with being part of a world — which is to say, the world — where everyone, like it or not, is under observation.

Their particular corner of the world has been designed to resemble one of those antiseptic play spaces in which victims of child abuse are interrogated on cop shows. All the cast is in full view when the audience arrives. A transparent wall separates us from them. And the presumption is that while we can see the performers, when they look out from the stage, all they see is their own reflections.

At this point, they are doing casual kid things — like playing cards or jacks (a bit anachronistically, I thought), or leafing through magazines. Occasionally, they’ll stop and check out their own images, with what might be described as a hopeful ambivalence. Then the Voice is heard.

As anonymous and inhumanly smooth as a smartphone personal assistant, this Voice is female and BBC British. It instructs the cast members on what to do as they pass through the ages of their lives, and asks daunting questions about how they feel and what they’re thinking. Like most voices of this ilk, you wish that it were coming from a human throat so you could strangle it.

As it demonstrated in earlier works like “Super Night Shot” and the marvelous “Western Society,” Gob Squad is inspired in its telling use of contemporary technology. In “Before Your Very Eyes,” the omniscient, dictatorial Voice implicitly speaks volumes (so to speak) about our technocracy-rooted phobias, and it’s a lot more viscerally disturbing than the reiterated message that we’re all dying all the time.

The use of video as a means of capturing and distorting past and present lives is also terrific throughout. An opening sequence, which introduces the cast individually, segues exhilaratingly and unsettlingly between their digital and live alter egos dancing to Queen’s “Don’t Stop Me Now.” And the early scenes in which the performers watch videotapes of interviews with their younger selves summon the discomfort we all feel when we’re reintroduced to the people we once were.
These moments throb with a palpable human pulse and, implicitly, our awareness that all human pulses eventually stop. I was close to tears during much of the show’s first 20 minutes. And the scenes in which the children transform themselves into hormonal train wrecks of teenagers are delightful.

But as the years push them forward, into middle age and beyond, they become ever more generic and less interesting. Assembled for listless cocktail parties, they take turns lamenting the lives they didn’t live and lip-syncing to the heartbreak ballad “Non, Je Ne Regrette Rien.”

It is presumably the show’s point that time is a cruel leveler, which irons out our distinctive traits as well as our illusions. Or maybe what we’re seeing is what the young performers fear they’ll turn into eventually. Either way, it’s a drag. Only our connection to the style and energy of the cast members keeps us entirely engaged.
Movies of recent years have been chronicling the effect of time (real time) on individuals, whether in fictional films like Richard Linklater’s “Boyhood” or in Michael Apted’s splendid documentary “Up” series, which has followed a group of 14 Britons from the age of 7 to (so far) their 50s.

What’s so intriguing about Mr. Apted’s documentaries is how different people turn out so differently, and so contrary to our (and their) expectations. Yes, they all experience similar effects of getting older, but it’s the distinctive ways they do so that engross us.

In stressing the way time erases rather than embellishes, “Before Your Very Eyes” digs itself into the special rut of classic Everyman plays. The good news is that its young cast members continue to shimmer with captivating idiosyncrasies even as death casts its drably equalizing shadow.